FoxPDF Office to PDF Converter an utility designed to convert a batch of Microsoft Office documents to Acrobat PDF documents. 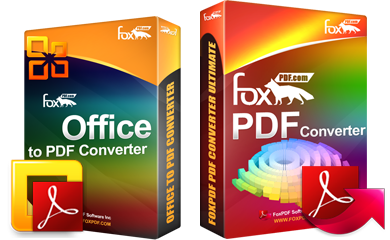 "I was desperate...your results were converter perfect! Thanks!" - Geoffery V.

"The best Office to PDF converter Software in the world." - Timothy V .

FoxPDF Office to PDF Converter allows you convert Word to PDF(Doc to PDF, Docx to PDF), Excel to PDF(Xls to PDF, Xlsx to PDF), PowerPoint to PDF(PPT to PDF, PPTX to PDF), Visio to PDF(VSD to PDF) directly without need of Word, Excel, PowerPoint and Viso, it converts Doc, Docx, Xls, Xlsx, PPT, PPTX and VSD files into vector PDF files, quick and easily.

Only drag and drop your Microsoft Office files and it doesn't require Adobe Acrobat or Adobe Reader while converting Word to PDF(Doc to PDF, Docx to PDF), Excel to PDF(Xls to PDF, Xlsx to PDF), PowerPoint to PDF(PPT to PDF, PPTX to PDF), Visio to PDF(VSD to PDF). FoxPDF Office to PDF Converter has high compatibility with Word, Excel, PowerPoint and Viso.

FoxPDF Office to PDF Converter is easy to use. Just click the button to convert your Office File to PDF. Convert Microsoft Word, Excel, PowerPoint, Visio to PDF files;

. Enable batch conversion to convert more than one file at a time.
. Support Intel®, NVIDIA® and AMD® to generate 6X faster pdf conversion speed.
. Save new custom pdf profiles and presets to all files with one click.

How to convert Office to PDF tutorial: 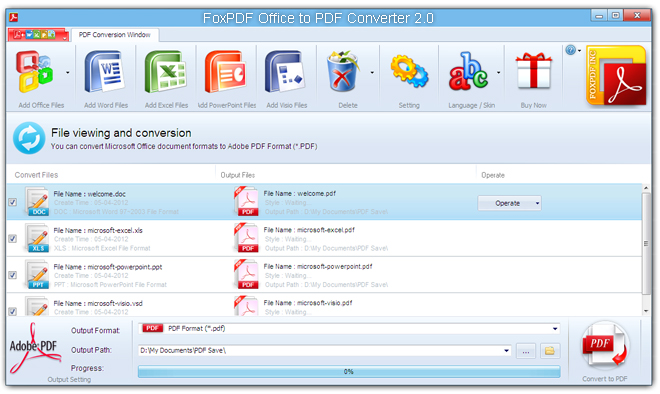 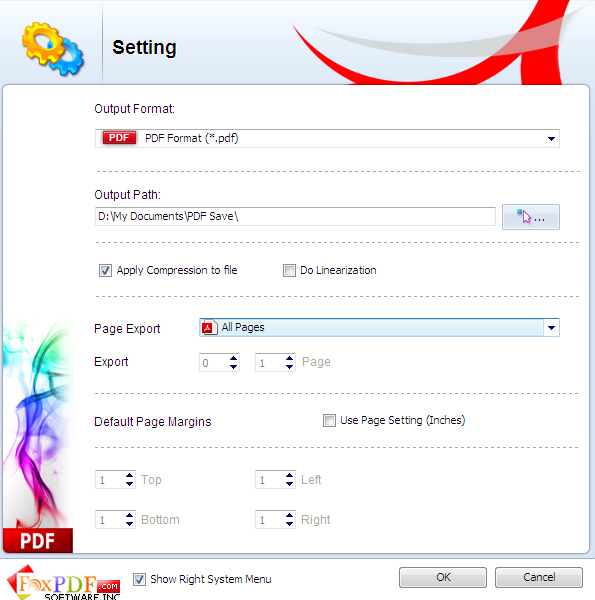 Step 4: After all PowerPoint file you want to convert has been added to the Office to PDF converter, Click the CONVERT button to start converting. 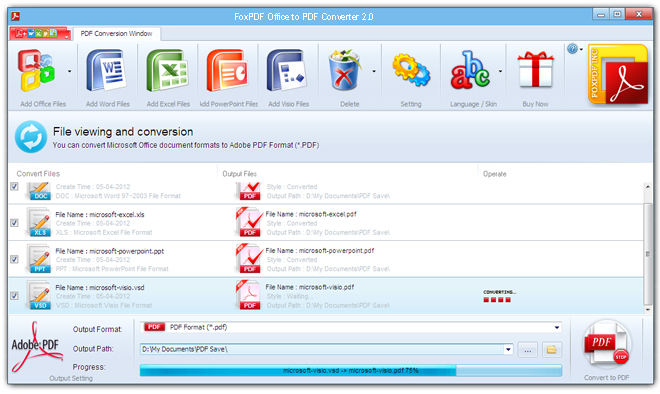 That’s all, it's very easy for you to convert Office files to PDF with FoxPDF Office to PDF converter.

Why you need to convert Office to PDF?

Microsoft Office is a proprietary commercial office suite of desktop applications, servers and services for the Microsoft Windows and Mac OS X operating systems, introduced by Microsoft on August 1, 1989. However PDF is de facto the standard for the document interchange over the Internet. If you need to convert your Office to PDF(Word to PDF, Excel to PDF, PowerPoint to PDF, Visio to PDF) on the desktop, you can use FoxPDF Office to PDF Converter

Compactable to compress large files Imagine a room filled with filing cabinets. Imagine large files of paper to organize and look over. Now, imagine sending them over to an administrator. A filing clerk’s nightmare? Not anymore. The PDF can make your job a lot more easier. Imagine a single desk with a computer. Imagine file names to scan over, convert and click on. Now, imagine sending them via e-mail. . . . The PDF’s ability to compress large files is a worker’s dream!

Self-contained Where viewing the original document source is essential, the PDF is the ultimate solution. It has the ability to exist independently from the hardware, software and operating system (OS) used to create or view the PDF document. What does this mean? It not only makes it easy to transmit files between computers with different applications, it also means that you can get your documents across clearly and avoid any communication problems wherever possible. Preserving the look and feel of the original source file becomes a priority you don’t have to worry about.

"PDF" (Portable Document Format) is Adobe(R) Acrobat(R) format. PDF is a proprietary format that allows you to read electronic documents, either on or off line. This format provides a page-by-page view of documents, exactly as they appear in their printed form, as well as allowing keyword search. Adobe provides a free Acrobat Reader that allows you to view, navigate, and print PDF files across all major computing platforms. It is the free viewing companion to Adobe Acrobat and to Acrobat Capture(R) software. If you do not already have it, you may use the link at left to download the FREE Adobe Acrobat reader, which you may then install and use to access PDF documents .

What is Microsoft Office ?

Microsoft Office is a proprietary commercial office suite of desktop applications, servers and services for the Microsoft Windows and Mac OS X operating systems, introduced by Microsoft on August 1, 1989. Initially a marketing term for a bundled set of applications, the first version of Office contained Microsoft Word, Microsoft Excel, and Microsoft PowerPoint. Over the years, Office applications have grown substantially closer with shared features such as a common spell checker, OLE data integration and Microsoft Visual Basic for Applications scripting language. Microsoft also positions Office as a development platform for line-of-business software under the Office Business Applications brand.

Microsoft Word is a word processor and was previously considered the main program in Office. Its proprietary DOC format is considered a de facto standard, although Word 2007 can also use a new XML-based, Microsoft Office-optimized format called .DOCX, which has been controversially standardized by Ecma International as Office Open XML and its SP2 update supports PDF and a limited ODF. Word is also available in some editions of Microsoft Works. It is available for the Windows and Mac platforms. The first version of Word, released in the autumn of 1983, was for the MS-DOS operating system and had the distinction of introducing the mouse to a broad population. Word 1.0 could be purchased with a bundled mouse, though none was required. Following the precedents of LisaWrite and MacWrite, Word for Macintosh attempted to add closer WYSIWYG features into its package. Word for Mac was released in 1985. Word for Mac was the first graphical version of Microsoft Word. Despite its bugginess, it became one of the most popular Mac applications.

Microsoft Excel is a spreadsheet program that originally competed with the dominant Lotus 1-2-3, but eventually outsold it. It is available for the Windows and Mac platforms. Microsoft released the first version of Excel for the Mac in 1985, and the first Windows version (numbered 2.05 to line up with the Mac and bundled with a standalone Windows run-time environment) in November 1987.

Microsoft PowerPoint is a popular presentation program for Windows and Mac. It is used to create slideshows, composed of text, graphics, movies and other objects, which can be displayed on-screen and navigated through by the presenter or printed out on transparencies or slides.

Microsoft Visio is one the the latest additions to the Microsoft Office suite. Visio is drawing software package that helps you with all of your drawing and graphing needs - from organization and flow charts - to database designs automatically imported and generated from existing database systems. Software developers can also use Visio to draw UML (Unified Modeling Language) diagrams to visualize their designs. Furthermore network diagrams can easily be drawn and kept up to date with Visio. Already a popular tool prior to Microsoft's acquisition in 2000.